The Center for Family Justice Blog 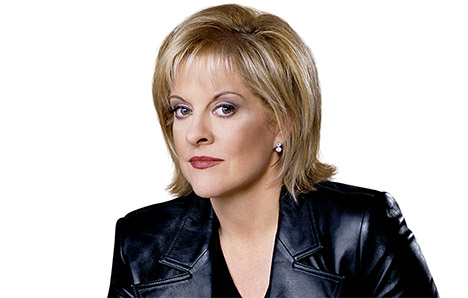 Nancy Grace’s path to becoming an outspoken, high-profile legal analyst and victims’ rights activist began with personal tragedy. When she was a 19-year-old college student, her fiancé, Keith Griffin, was murdered during a robbery. “His world ended and mine exploded,” she says.

The murder forever altered Grace’s dreams of becoming a professor of Shakespearean literature. Instead, the tragedy propelled her into the law. Grace worked as a prosecutor of felony crimes before she began her television career.

On Sept. 27 Grace was a headliner at The Center for Family Justice’s 19th annual Speaking of Women luncheon at the Waterview in Monroe. CFJ serves victims sexual and domestic violence and child abuse in Fairfield, Bridgeport, Easton, Stratford, Trumbull and Monroe.

After addressing more than four hundred guests, Grace sat down to answer some questions about her unwavering passion for being a voice for the voiceless.

She also clued us in on what’s next after her Nancy Grace Show ends its run after more than a decade on HLN on Oct. 13.

CFJ: October is Domestic Violence Awareness month. Any myths about domestic violence you would like to dispel?

NG: When I worked as a prosecutor I volunteered for ten years at the Atlanta Battered Women’s shelter. And what I learned there is that there’s a perception this impacts a certain socio-economic group; that they are perceived to be poor, uneducated and growing up on the wrong side of the tracks. It’s just not true. It impacts everyone in every class of our society. Rich, poor, every race and socioeconomic group. No one is immune

CFJ: What’s your message to someone who’s experienced domestic or sexual violence and is trying to rebuild their lives?

NG: When I became a victim of violent crime, it took me many, many years to allow myself to start over. I accomplished a lot in those years—I became a lawyer, a prosecutor, a TV host—but it took me years to embrace recovery in my heart. So I tell people to embrace it. Get the help you need because you can. It’s there. Places like The Center for Family Justice are really there to help.

CFJ: It seemed like there was a collective outcry recently when former Stanford swimmer Brock Turner received a light sentence for a sexual assault outside a frat party. What did you think about the response?

NG: I’m very inspired that there seems to be a pro-victims movement coming out of events like Brock Turner. There is a change in the conversation. And it’s very encouraging. I saw personally as a prosecutor how important it was for victims to be heard. I prosecuted a case involving a serial rapist and people assumed the victims wouldn’t want it covered on TV. But the ladies came together and said, “Wait a minute. We did nothing wrong. Why should we be ashamed? Why should we hide?” And Court TV covered it gavel to gavel. The victims wanted to be heard. They wanted people to know what was done to them; that they were not to blame.

CFJ: Your HLN show is ending after almost twelve years on the air. What’s next?

NG: I’m going to have a crime news web site. I really believe the digital space needs to be developed in this area; especially for a younger audience. I’m also excited that one of my Hailey Dean mysteries (Grace is a published author) is coming the Hallmark Channel. It’s called Murder, with Love.  I’m sure I’ll end up on TV again eventually, b